Share this on social:
Have you check what exactly is the difference between the two new MacBook Air revealed the other day? Actually there are lots than what you’ve thought from your first impression.

You might be buying your first Mac and I think it’s a better idea to look over the specs and features of these notebooks. 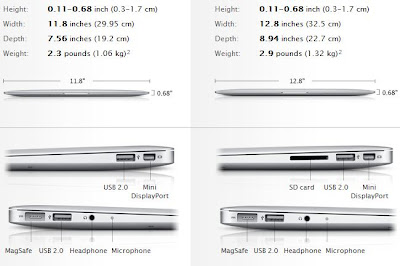 Both of these notebooks have been built with the same full keyboard and multi-touch trackpad, as well as the wireless connectivity and audio options. For connections and expansion slots, I guess the 13-inch model got another point as it has a SD card slot, along with USB 2.0 and Mini DisplayPort. What you will also like with the 13-inch model is the battery life since it’s capable up to 7 hours of wireless productivity, a test conducted by Apple to measure battery life by wirelessly browsing 25 popular websites with display brightness set to 50%.

By the way, both of these include Apple Mac OS X Snow Leopard and iLife 2011. To wrap this up, you may take a look at the comparison table here.

So, are you going to buy one? Say something on the comment section below.