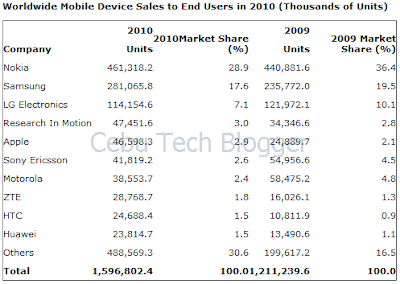 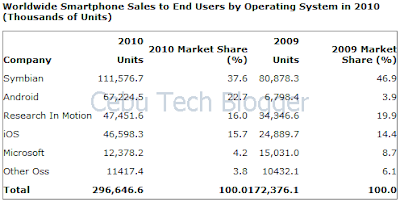 Worldwide smartphone sales to end users grew 72 percent in 2010 from a year earlier, to a total of 297 million units. Symbian OS still accounted the most number of handsets despite a 9.3 percent decline of the market share. Android market share is on the extent of sloping sharply in which it grew 888.8 percent in the previous year accounting to 67.2 million units, taking the number 2 spot of the most-widely used smartphone OS. Though Android surpassed Symbian OS in the fourth quarter of 2010, legacy products from Sony Ericsson, Samsung, and other phone manufacturers using the latter platform still pulled up the OS from the Finnish company to the first spot.

RIM’s BlackBerry OS and Apple’s iOS took the 3rd and 4th position, respectively; while Microsoft’s Windows Phone 7 at the 5th position of the total market share by Operating System in 2010. [via]