Share this on social:
Also announced at Apple’s “Let’s talk iPhone” event the other day are the new iPods — a white version of iPod Touch 4G and an updated iPod Nano. 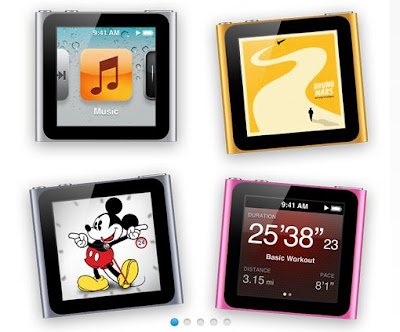 First up is iPod Nano. This year’s iPod Nano, should I say iPod Nano 7th-gen, retains almost the same physical design as the 2010 version. Available in 7 colors, it’s still compact at 1.54-inch, comes with multi-touch display, with volume buttons and integrated clip, FM radio, and of course the Pedometer which is a good feature for fitness. What I also like with the new iPod Nano aside from being a music-centric gadget is the built-in clock which now comes with 16 new faces including Roman Numerals, classic LCD style, and if you think for a kid – there’s a Mickey Mouse watch, too! And interestingly, the 2011 iPod Nano is more affordable this time with a price drop compared to the 6th-gen version. Listed at the Philippines Apple Store, iPod Nano is available at Php 7,490 for the 8GB model and Php 8,690 for the 16GB model.

On the other hand, the iPod Touch 4G doesn’t come anything new in the inside. It’s still the same iPod Touch 4G we’ve seen last year, featuring an ultra-thin design, the 3.5-inch multi-touch retina display, rear-facing camera and front-facing camera for FaceTime, HD video recording, built-in speaker and microphone, the Gyroscope and accelerometer and ambient light sensor. What Apple did to have a new variant on its iPod lineup is to add a White model of iPod Touch 4G. The price of the 8GB variant dropped by Php 1K from last year’s price of Php 12,490; however, the 32GB and 64GB model increased also by Php 1K compared to the previous year prices of Php 15,990 and Php 21,990, respectively.

To recap, prices of iPod Touch 4G (Black or White) this year here in the Philippines follows:

Look, this is What They Call Magical iOS 5!