ABS-CBN’s fantasy series, “Imortal” hit Twitter’s top 10 trending topics not only in the Philippines, but worldwide.
This new series which is a sequel of the 2008 “Lobo”, premiered last night starring the award-winning stars- Angel Locsin and John Lloyd Cruz. 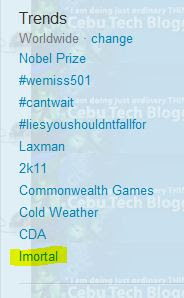 Among other trending topics on Twitter when “Imortal” pops up (October 5, 9:30PM Philippine Time) include Nobel Prize, #wemiss501, #cantwait, #liesyoushouldntfallfor, Laxman, 2k11, Commonwealth Games, Cold Weather, and SS501. Are you one of those buzzing this “Imortal” craze on Twitter?

List of Apple Stores Selling iPad 2 in the Philippines

All First-Gen iPad in the Philippines is Now Priced Php 4000 Less, Ships in 24 Hours

How Many People Have My Name?