Share this on social:
When RIM unveiled the BlackBerry PlayBook last year, we thought Apple’s iPad and Samsung’s first-gen Galaxy Tab got a serious contender in today’s tablet warfare.

But because more and more tablet makers have introduced their own slates, even before RIM made the official launch of its tablet – the hype for the PlayBook started fading gray. Loyal BlackBerry fans however, might still have supported the PlayBook; but RIM sales figure pegged not even to hit the 1-million mark in the first half of this year suggests it would never be a winner in the entire competition. 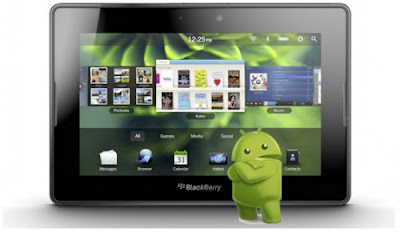 Definitely, the BlackBerry PlayBook has its own share of the pie and RIM may have attracted consumers with the tablet’s unique QNX-based operating system being capable of running Android applications. Yes, RIM once announced Android apps will support the PlayBook and it’s undeniably a good selling point any buyer should consider. But wait… Android apps indeed will support the PlayBook; however, there’s a catch. Not all features of Android are supported. And again, that’s according to the Canadian tablet maker.

Key features which will be unavailable to Android apps running under the compatibility layer on the PlayBook and future BlackBerry devices include Android’s famed battery-sucking Live Wallpaper, SIP and SIP VoIP, anything built using the Native Development Kit, apps containing only App Widgets, and apps containing more than one activity tied to the Launcher.

In addition, any packages which rely on Google Maps, in-app billing services, Android’s text-to-speech engine, or the cloud-to-device messaging system will all be rendered unusable under the company’s runtime system.

So what does this exactly mean? It’s obviously a compromise Android experience. Period! But yeah, in all fairness with RIM, it’s still a commendable job bringing that Android App Player which does all the magic so Android apps will run in BlackBerry PlayBook. And hopefully PlayBook users will see it anytime soon.

Got a PlayBook? So how do you feel about this? Quite disappointing? Say it loud in the comment section below. [via]

To receive latest technology updates, you can subscribe either by E-mail or by RSS Feeds. Follow me also on Twitter.
Tags: BlackBerry Philippines, BlackBerry PlayBook, RIM

I Think Globe Telecom Just Fooled Me, Or Everyone…