Share this on social:
Google is set to launch the next major version of Android OS, the Ice Cream Sandwich, sometime in October or November, according to the company’s Chairman and former CEO, Eric Schmidt. 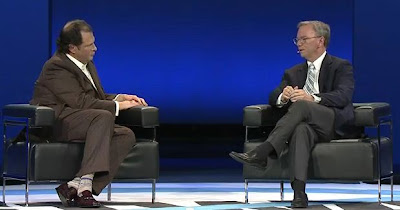 Though not really that surprising since we initially learned it’s coming this Q4, the unofficial, or should I say “accidental” announcement of the Ice Cream Sandwich release was spilled while Schmidt was in an interview with SalesForce.com CEO Marc Benioff during a Dreamforce conference in San Francisco.

We have a new operating system, internally known as Ice Cream Sandwich for some reason, which is being released in October/November, which everyone’s really excited about.

Watch the interview below.

Android Ice Cream Sandwich is said to be Google’s “most ambitious release to date” bringing new features like facial recognition and the ability to unify all versions of Android, which currently are fragmented. What this means is Ice Cream Sandwich is optimized so it works on every device, be it a low or high end smartphone, a tablet, and computer. That also means you won’t be tired hearing smartphones only got Gingerbread while the latest tablets today carry Honeycomb. When Ice Cream Sandwich goes official, expect those Honeycomb features to be available on smartphones, too. Seriously, it’s quite ambitious, but yeah – it’s Google! [via]

To receive latest technology updates, you can subscribe either by E-mail or by RSS Feeds. Follow me also on Twitter.
Tags: Android, Android Ice Cream Sandwich, Eric Schmidt, Tech News

Angry Birds Rio is Coming… and They Need Your Help!