Share this on social:
Okay… Okay… Okay… You play Angry Birds, right? Well, so am I. I personally loved it. It’s incredibly addictive, yet not boring.
And if you think it will only end on your smartphones and tablet devices, you got yourself wrong. We already proved that. And what’s more, Angry Birds will also hit on big screens, the theaters, comes April 15th this year. Exciting, eh? 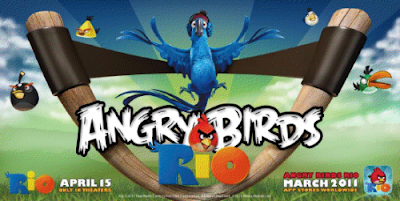 Not long after they arrive, Blu and Jewel are kidnapped by a group of bungling animal smugglers. With the help of street smart Jewel, and a group of wise-cracking and smooth-talking city birds, Blu escapes. Now, with his new friends by his side, Blu will have to find the courage to learn to fly, thwart the kidnappers who are hot on their trail, and return to Linda, the best friend a bird ever had.

The story doesn’t end there, Angry Birds fans, ‘coz prior to the release of the movie – a new version of this popular game called Angry Birds Rio will be available for download on your smart phones and tablets, basically iOS and Android-based devices. The game will come with 45 dedicated levels and with added new levels via updates. There’s no pricing details announced yet, but we’ll uncover that soon.

In Angry Birds Rio, the original Angry Birds are kidnapped and taken to the magical city of Rio, where they eventually escape their captors and set out to save their friends, Blu and Jewel – two rare macaws and the stars of the upcoming Fox motion picture, Rio. Angry Birds Rio will pair the physics-based gameplay of the original game with unique twists based on the highly-anticipated film.

Got a glimpse with the trailer and I realized the flocks really need our help. Can’t imagine how badly they need your help? Hit the video after the break.

To receive latest technology updates, you can subscribe either by E-mail or by RSS Feeds. Follow me also on Twitter.
Tags: Angry+Birds, Apps, Games and Gaming