Share this on social:
Not much of a surprise, but Apple already announced earlier today the upcoming release of the latest version of its mobile operating system.

iOS 5 is set to be available for download come fall or some time in September this year. iOS 5 is promised to be compatible with iPhone 3GS, iPhone 4, iPod Touch 3G, iPod Touch 4G, the first-gen iPad, and iPad 2.

iOS 5 is packed with new functionalities and cool features which enhance the overall user experience on previous version of the firmware running on iDevices. Below are the top highlights from among 200 features available in iOS 5.

Notification Center: Most of the day we receive lots of notifications from text messages, new emails, schedules, and etc. The Notification Center simply shows an animated notification on top of your screen and then hides automatically without interrupting the current applications running on your device. Simply slide from top of the screen, and there you’ll see your missed calls, reminders, schedules, and other stuff that need your attention displayed on the screen.

Notifications also appear on the lock screen, with the ability to be taken to the notifying app with just one swipe. Simply swipe on the message and it will load right into the apps that sent the notification. That’s actually the same feature as seen on BiteSMS. Am I right, jailbreakers?

Newsstand: Organize your subscriptions on magazines, newspapers, and e-readers in one place and then update automatically allowing you to have the latest issue complete with new cover. 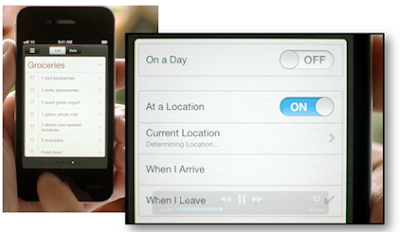 Reminders App: allows you to organize and manage task and to-do list which also syncs with iCal and Outlook. Added features include the location based reminders that is activated when you arrived on the destination or leave somewhere either from your office or at home. 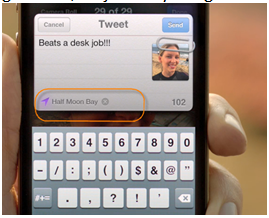 Twitter Integration: Twitter applications are now fully integrated on iOS 5. You just simple sign-in to Twitter at once on your device and all apps requiring Twitter credentials will just utilize the details you’ve entered from your first login. In this way, tweeting photos and videos directly from galleries, or just anything about “tweeting” has been made even easier. 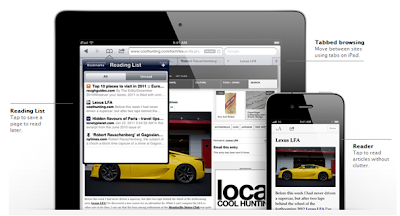 Optimized Safari Web Browsing: Safari, if I’m not mistaken, has been the most fully-featured web browser integrated on mobile devices. With iOS 5 devices, Safari seems to offer a better browsing experience with its new features: the Safari Reader, Reading List, and Tabbed Browsing. Safari Reader gets all the clutter out of the way and sets the right font size on a web page, so users can navigate and read contents easily. Reading List on the other hand works as if you’re flagging stars on articles saving it for later reading. iPad users will also get to enjoy the new feature of Safari called Tabbed Browsing, which makes it easy to flip between multiple web pages.

Enhanced Camera App: Immediately capture the moment right from your iOS device. Camera App can now be accessed easily right on your Lock Screen and then use the volume button to snap and take picture. Use grid lines, pinch-to-zoom gestures, and single-tap focus for good composition of your photos. Edit your photo as well directly from your iPhone or iPad with its photo enhancing features that allows you to crop, red-eye reduction, or simply auto-enhance the images. 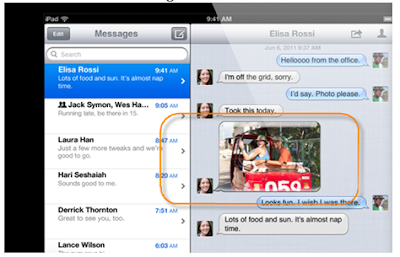 iMessage: Texting had been the most effective way of communication on mobile device. iMessage provides easy way to not just text messages but also share photos and videos exclusively to all iOS devices via Wi-Fi or 3G connections. Ellipsis points appear when someone’s responding on your message. With the iCloud service from apple, you can start a conversation with any of your iOS device like iPad and then reply on your iPhone. Sort of communication on the go.

Game Center: Game Center first became available in iOS 4. It’s an arena for gamers to find friends, or go up against each other even from anywhere around the world. In iOS 5, it brings Game Center with the ability to add photos to your profile, purchase new games from within the Game Center app and expand your social gaming network easier.

iCloud Sync: Using Dropbox? Think iCloud as the similar, or let me say, a better cloud-based service from Apple. In iOS 5, you can sync contents in your iOS device to iCloud just by entering your Apple ID and password. Keep all of your mail, contacts, calendars, photos, apps, books, music and more, up-to-date across all your devices without ever having to connect to a computer – that is wirelessly! Do we have to say goodbye to iTunes? No, not really.

Multitasking Gestures and Airplay Mirroring for iPad: iOS 5 includes new moves and shortcuts to help you get around even quicker with your iPad. Using four or five fingers, swipe up to review the multitasking bar, pinch to return to the home screen, or swipe left and right to switch between active applications.

Airplay Mirroring on the other hand allows you to stream your photos or videos wirelessly on your HDTV via Apple TV. Though just available for iPad 2, this feature lets everyone sees exactly what’s on your iPad display – even when you rotate the tablet’s position from portrait to landscape or zoom in and out on photos.

That’s it! Again, Apple will bring around 200 new features in iOS 5, so I guess it’s something we shouldn’t have to miss. I’m personally excited running it on my iPhone 4, but I understand we gotta wait ‘till fall before the update become available. Stay tuned!