Share this on social:
When Apple announced its official earnings for fiscal year 2011 last Tuesday, January 18th, with whopping $26.7 billion total revenue for the first quarter alone, the App Store has over 300,000 apps available that have been downloaded over 9 billion times.

By then, Apple posted a counter on the App Store in a quest to identify who’s the lucky user to download the 10-billionth app and ultimately win $10,000 worth of iTunes Gift Card. That’s a huge amount of money if you don’t mind, but not bad to become greedy and be tracked as the 10-billionth app downloader though. 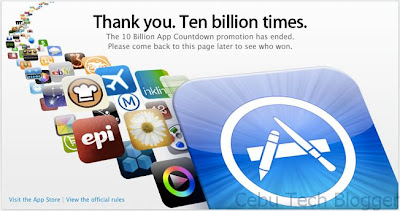 But anyway, it’s over. Apple already hit over 10 billion downloads to date and the company is now extending its sincere thanks to those who participated the quest and continue downloading more apps; a great milestone for a service that Apple introduced back in mid-2008 as part of the iTunes. With the growing number of iPhone, iPod Touch, and iPad devices – it’s undoubtedly possible Apple will double the number in a year or two.

For now, we’ll just have to wait Apple’s official revelation of the 10-billion App Countdown promo winner– so just stay tuned with the Cebu Tech Blogger for more updates! J

To receive latest technology updates, you can subscribe either by E-mail or by RSS Feeds. Follow me also on Twitter.
Tags: App Store, Apple Philippines, Apps