Apple just released the beta version of iOS 4.3 to developers yesterday, and while there’s no word of its official release to the general public – the folks at Redmond Pie are reporting that the latest firmware for iPhone and iPad will be available sometime in March. 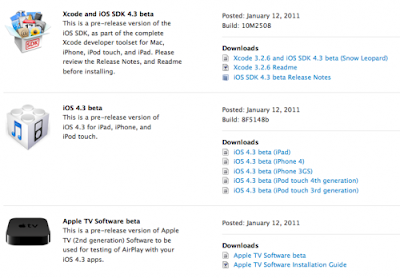 iOS 4.3 Build 8F5148b is said to bring the Personal Hotspot feature to GSM-based iPhone 4 devices. The Personal Hotspot is a feature which allows Wi-Fi tethering (utilizing cellular data) on the recently-announced CDMA-based iPhone 4 from Verizon Wireless in the US. Though Verizon’s iPhone 4 will be available by February 10th and will run on iOS 4.2.5, Apple won’t release a firmware update to existing iPhone 4 users to match with that of Verizon’s. Instead, they will be releasing iOS 4.3 (with Personal Hotspot) in March. So, that actually makes sense.

Anyway, we’ll let you know more once we get official word from Apple, or perhaps more evidence and proof. [via]