Share this on social:
When Apple released the first generation iPad models last year, it started at $499 to $699 for the Wi-Fi only version; while the one which supports both 3G and Wi-Fi are priced at $629 to $829 depending on the storage size.
The 2nd-gen iPad which has already been released in the US few days ago comes with a price tag similar to its predecessor, regardless of the model. 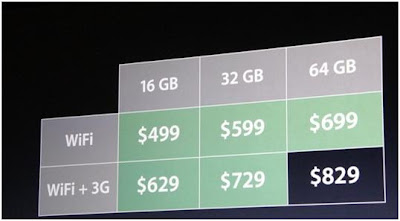 Though the Philippines is not included on the list of selected territories to have the tablet available by March 25th, the country seems to show huge interest of the iPad 2 slate over other tablets; despite seeing a significant drop of the original iPad price. And what’s more interesting to see is how iPad 2 prices vary from several resellers in the grey market. This is perhaps due to a high demand, yet only few units are available in the supply chain. The cheapest I’ve seen at Sulit.com.ph is at Php 27,500 for a 16GB Wi-Fi Only iPad 2, or as high as Php 31,500 for the same model from another vendor. Expect to see higher prices for other models though.

When the 1st-gen iPad landed here in the country, Apple Philippines posted an entry level price tag of Php 23,990 for a 16GB Wi-Fi only version, or Php 30,990 for Wi-Fi with 3G version of the tablet. Add Php 5K or Php 10K more and you get the 32GB or 64GB versions, respectively. Though there are really lots of factors to consider in pricing of goods here in the country, for the case of Apple, I’m expecting to see iPad 2 priced not far from that of its predecessor. Should I say just around Php 24,500 for a 16GB Wi-Fi model? Well, with the constant fluctuation of the exchange rates – I’m not really sure. But with the strong competition of the tablets, I don’t think iPad 2 would be too pricey for Apple to win.

If Apple follows the same roadmap of the 1st-gen iPad in the country, we can expect an official release of iPad 2 by Q4 this year. And if that sounds too long for you before you can take your hands on the tablet, I think you have the reason to take the bait of the quite expensive slates in the grey market. Should you?

Anyway, I’ll just let you know once we got the official price of iPad 2 here in the Philippines.

To receive latest technology updates, you can subscribe either by E-mail or by RSS Feeds. Follow me also on Twitter.
Tags: Apple Philippines, iPad 2, Tablet, Tech News

WTH! iPhone 4 is Controlling a Helicopter!