Share this on social:
Enough for the rumors of the next generation smartphone from the Cupertino company because what we are expecting as the iPhone 4S or iPhone 5 is unlikely to exist in reality, at least during the upcoming Wordwide Developers Conference (WWDC) set on Monday, June 6th in San Francisco, California. 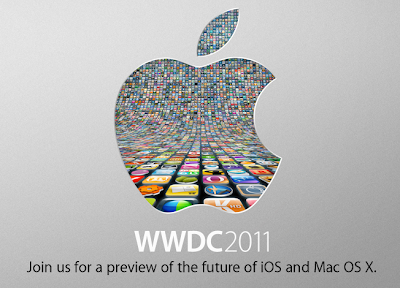 In a press release, Apple is said to unveil only its next generation software – the Mac OS X Lion, the iOS 5, and the company’s upcoming cloud services offering – the iCloud.

Apple® CEO Steve Jobs and a team of Apple executives will kick off the company’s annual Worldwide Developers Conference (WWDC) with a keynote address on Monday, June 6 at 10:00 a.m. At the keynote, Apple will unveil its next generation software – Lion, the eighth major release of Mac OS® X; iOS 5, the next version of Apple’s advanced mobile operating system which powers the iPad®, iPhone® and iPod touch®; and iCloud®, Apple’s upcoming cloud services offering.

The WWDC is actually the historic annual event of Apple in which new iPhone hardware is being introduced. But with the recent announcement, Apple seems to change its roadmap – that is not unveiling the new model of its smartphone at the event.

That means, certainty of the next iPhone is still has to be deciphered through our creative theories. But who knows Steve Jobs will bring us some surprises. Of course we’ll be following the happenings in WWDC, so just stay tuned for updates. [via]

Revert / Bring Back the Old Facebook Chat Interface [How to]