Share this on social:
We knew Apple is most likely to out 3 more iPad models in the future, at least if the details dug on iOS 4.3 turns to be true.


But for now, we are more interested of hearing updates on Apple’s 2nd iteration of its successful slate – the iPad. All Things Digital is reporting that Apple is scheduled to hold an event comes March 2nd. And what you would love to hear is it’s probably the unveiling of iPad 2! The event is said to take place in San Francisco at the Yerba Buena Center for the Arts, the venue where some previous iPod models had been unveiled. Though members of the press in the US (who are usually invited on much-anticipated events like this) haven’t receive any invitation from Apple yet, the folks at All Things D are pretty confident about the possibility of the said event next week. (See update below)

Specs–culation of the 2nd-gen iPad includes an improved display (probably not retina display), front-facing camera, Facetime support, runs on iOS 4.3, and it would probably thinner than the first-generation iPad.

If the said Apple event push-through next week, we could expect the release of iPad 2 by April; and as usual, it would probably land here in the Philippines at the end of the year. Anyway, let’s see and just stay tuned! [via]

Update 1:
The iPad 2 event on March 2 is official. Apple is said to sending out invitations to the press, and as initially reported – the event will be held at Yerba Buena Center for the Arts in San Francisco. 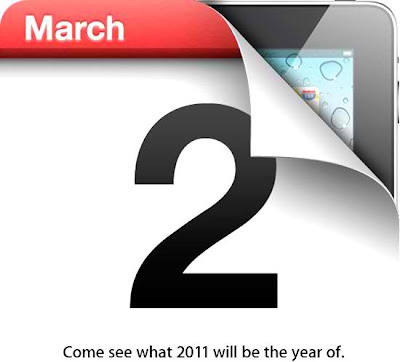 Smart LAHATXT UNLI25 Gets Even Better with 10 Minutes Free Call