Share this on social:
The Canadian Telco, Research In Motion (RIM), finally announced the availability together with the official price of the much-anticipated BlackBerry PlayBook.

The PlayBook is the company’s first tablet set to retail comes April 19th in more than 20,000 sales outlets in the US and Canada. 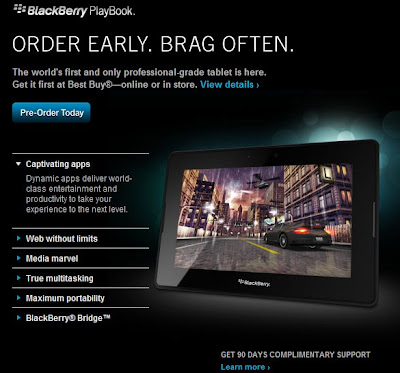 Just in case you didn’t notice, the official price for every PlayBook variant is actually just the same of the WiFi-only versions of the iPad 2. That means, if you’re going to choose between the PlayBook and iPad 2 – you probably don’t need to look at the price schedule.

Best Buy online stores in the US and Canada are already accepting pre-orders starting today. If you think of getting one, just head over here and here. Don’t forget to check this demo to help you decide.

To receive latest technology updates, you can subscribe either by E-mail or by RSS Feeds. Follow me also on Twitter.
Tags: BlackBerry Philippines, BlackBerry PlayBook, Tablet, Tech News