I was a bit intrigued of the latest buzzes on the web regarding the twitter profile of Craig Ferguson.
I don’t know much about this person, so I made a quick research from my friend, Google.

Craig Ferguson, or Craigyferg for short, is a Scottish American television host, stand-up comedian, writer, and actor. He is the host of The Late Late Show with Craig Ferguson, an Emmy Award-nominated late-night talk show that airs on CBS. 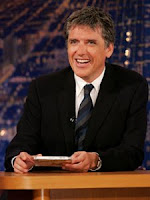 Craig Ferguson is the author of the novel Between the Bridge and the River and American on Purpose– an autobiography. You can read more about him in Wikipedia.

Just last night, Craig Ferguson joined Twitter. He is probably the latest celebrity to use the most popular microblogging platform. You can follow him on his Twitter profile @CraigyFerg.

Line2 VOIP App for iPhone is down