Since I become an official member of the Cebu Bloggers Society, I attended most of its events particularly here in Cebu. 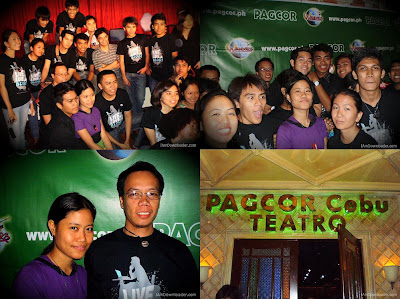 And the most recent event was the 2nd Cebu Digital Filipino Club and Bloggers Meet-up last July 11, 2009 at the Teatro Casino, Waterfront Cebu City Hotel & Casino. The event was hosted by Casino Filipino PAGCOR Cebu, and organized by Ms. Janette Toral of the Digital Filipino Club.Around 120 bloggers joined the event which includes the members of the Cebu Bloggers Society, the people behind Mynimo.com, Istorya.net, NgKhai.net, among others.

The event was basically focused in organizing a fellowship/networking where e-commerce industry players and bloggers catch-up and exchange update. The event started with the registration and dinner, followed with the introduction of individual blogger in which each had given a chance to share about his/her blog and personal facts. A welcome remark was given by a PAGCOR Cebu representative, and Ms. Janette Toral followed on with her talk featuring Digital Filipino Club updates. Highlighted during the talk over were the future Digital Filipino Club activities:

Also talked about were PAGCOR updates, followed-through with the raffles, networking, and games.

Noting Cebu Digital Filipino Club, Ms. Janette Toral cited this organization as “amazing to witness how much this community has grown.

What is a Blog and what is Blogging?

CTB is Moving to WordPress!