Share this on social:
In collaboration with Modiac, we are giving away another software license for free, this time a Blu-ray ripper that we haven’t tried before. 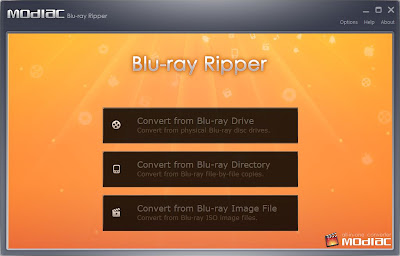 This software is called Modiac Blu-ray Ripper, a conversion tool that can decrypt Blu-ray discs and convert its contents to other media formats, such as common video formats—DVD, VCD, Mpeg4, AVI, MP4, MKV, WMA, FLV, RMVB, etc.; popular consoles, such as iPhone, iPad, iPod, PS3, PSP, Wii, NDS, and smartphones. It can also rip Blu-ray to all audio formats, such as DVD, MP3, MP4, M4A, WMA, WAV, AC3, and DTS.

I haven’t tried this software yet (just installed it today); however, Modiac claims its own patented decryption technique called as “Shadow Matrix” and its codec engine known as TESLA makes ripping faster (up to 20%) than other popular blu-ray rippers already out in the market today. Well, that’s something we really have to find out ourselves; but of course, that’s going to happen only if you got the software installed in your system, right? That being said, Modiac has offered unlimited free copies of Modiac Blu-ray ripper for CTB readers, and those interested of getting one, just use the registration info below to activate. Please note though that you need to activate the software only until October 22, 2011 11:59PM.

As usual, do let us know what you think about this Blu-ray ripping solution.

Gionee officially Launched the Elife E7 “Made for Shooting” smartphone in Cebu!

Protect Your Computer with Time Freeze 2.0