The Angry Birds app first become popular on Apple’s iOS devices when it once tops the chart of most downloaded apps at the Apple App Store. It became available at the Android Market later last year to cater Android-based handsets, and finally made its way to Intel’s AppUp Center as an exclusive version for Windows-based desktop and laptop computers. 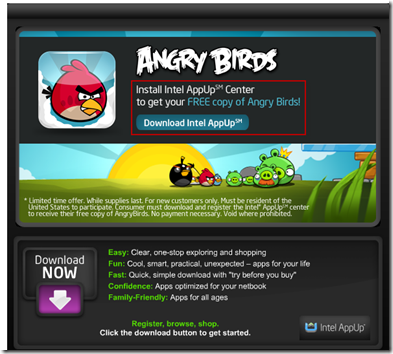 Originally, Angry Birds at Intel AppUp retails for $4.99, and the good news is – Best Buy and the chip maker teamed up to offer at a limited time free copies of the game to 50,000 users. Terms say that the offer is for new customers and must be resident of the US only. And if you think you qualify, this could be your chance to grab Angry Birds for free. Interested? Head over to this page.

It appears the limited offer to 50,000 users has ended already. We’re sorry to remove the download link above. Alternatively, there’s a web-based version of Angry Birds for you to download. You can also play Angry Birds directly on Google Chrome browser. We’ll constantly updating this post for the latest free Angry Birds offer in the future, so just stay tuned.

A free PC-version of Angry Birds is available for download. Read more about it here: Download Free Angry Birds for PC