Share this on social:
MeeGo, the OS that powers the Nokia N9 will finally and officially join the ranks of iOS, Android, Symbian, and Windows Phone – well, as far as playing full version of that addictive casual game Angry Birds is concerned.

The Nokia N9 is initially pre-loaded with NFC-enabled Angry Birds with Magic that you can play few levels of it, but for some it could be a bummer as it’s not the full version of the game just yet. Not a problem anymore though as Finnish game developer Rovio Mobile has now released the full version of the game. Nokia N9 users out there (at least in supported locations) can now enjoy playing the complete 288 levels of the game, of course only if you didn’t find it time-wasting, right? 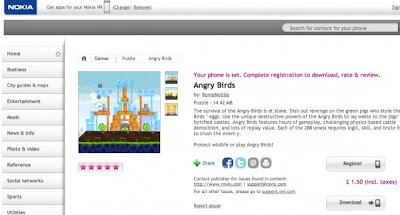 While the game costs 1.5 pounds for Nokia N9 in selected countries, the game may not be available for download in your location just yet (like here in the Philippines). Full version of Angry Birds will still remain free for other Symbian devices, and like for the MeeGo-powered Nokia N9 – availability depends on your location.

Go check out this link and do let us know if you’re able to get it!

LG Optimus Pad in Philippines Priced at Php 50K, Pre-Order Now and Get Php 15K Off

Windows Phone 7.5 (Mango) Update Coming in a Week or Two