Share this on social:
That was fast. Really, really fast!

Just less than two months since Firefox 5, the world’s second most widely used web browser is now set to be released as yet another new major version — that is as Firefox 6. Though Firefox 6 is scheduled for release in 3 days, the final build is actually available for download through FTP servers. 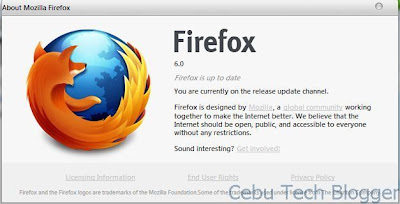 I’ve already download Firefox 6 moments ago, in fact I’m using it now, and I noticed almost nothing has changed in the UI of the previous version. Mozilla said Firefox 6 brings an improved speed performance of the browser with memory consumption reduced significantly. Among of the major changes include:

You may download Firefox 6 through the links below. Once you launch the browser, it would say you’re running Firefox Beta. Just ignore it anyway, ‘coz the fact is – Mozilla still has to update its website and you’re actually running the final build.

Globe Powersurf, Per Minute Web Surfing in 1 Hour for Php 15