If you are a Twitter user, then you must be familiar of the “retweet” function available mostly on social media website, blogs, or at Twitter homepage.
But, if you don’t have much idea about Twitter “retweet”– it just simply work as if you are telling again to a friend what information he hasn’t learned yet. 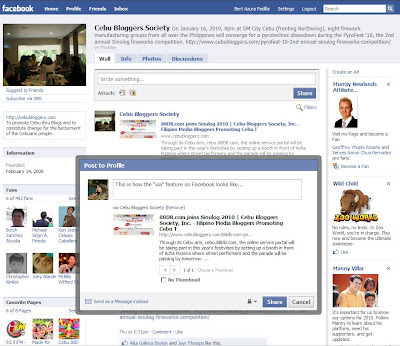 The image above is a screenshot of Cebu Bloggers Society Facebook page. As you can see, I am sharing a particular story published on its wall. Facebook “Via” works once you clicked the “share” link below the article. Then it will be published on your Facebook profile that looks like the image below. 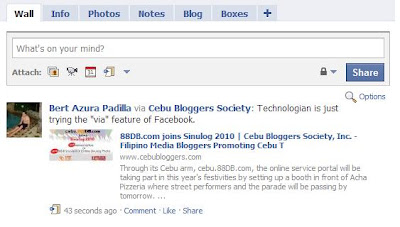 You will then see something on this format: “Facebook User1 via Facebook User2:”- …then the story you just shared. Isn’t it great?
It works like a Twitter “retweet”. Note that any article you are going to share will also include the name of the Facebook user that you found the article from. It’s a form of attribution and it helps generate a trail of the source of information in the social graph. Try it!

To get more buzz about the latest on Facebook, you can subscribe either by E-mail or by RSS Feeds.