Share this on social:
Fusion Garage is set to launch its new Grid OS-based tablet by end of the month, presumably by October 1st in the US, and surprisingly the company dropped the prices of each variant $200 less than the initial announcement. 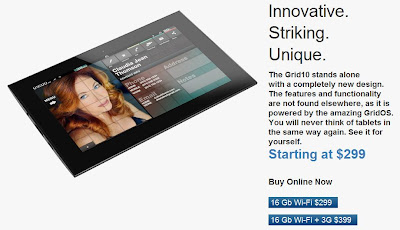 The price drop is obviously due to the tight competition against other tablet makers. And despite the Grid 10 tablet donning decent hardware specs on top of its unique Grid OS, Fusion Garage really has to do something strategically to win consumers and that could be by playing with the prices.

Philippines is listed on Fusion Garage’s subscription page for those who want to register their interest for the tablet, but it’s unclear just yet when the company will begin accepting pre-orders for additional countries. Just stay tuned as we’ll just keep you posted. [via]

To receive latest technology updates, you can subscribe either by E-mail or by RSS Feeds. Follow me also on Twitter.
Tags: Fusion+Garage, Grid, Grid+10, Grid+OS, Tech News

Missing Personal Hotspot in iOS 4.3.5, Here’s How to Fix!

And the Nokia E6 Winner Is…