Here’s an update on the workaround of the GreenPois0n Jailbreak for iOS 4.1. Five days ago, it was announced that GreenPoison was supposedly released on October 10th; however Geohot came back to the scene with his Limera1n jailbreak.
It eventually surprised the Dev Team and let them break the scheduled release of GreenPois0n. 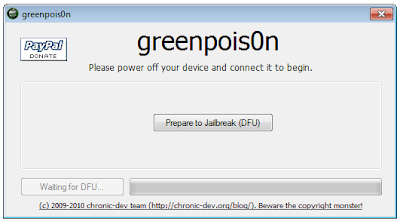 Everyone should note that this release of GreenPois0n jailbreak for iOS 4.1 don’t use the SHAtter exploit discovered by @pod2g. It uses the Limera1n exploit by Geohot for the sake of preserving the SHAtter exploit. It makes sense, though.

Unfortunately, as of this writing – only GreenPoison for Windows is available so far. Version for Mac will surely follow, so just stay tuned for future updates. [via Chronic Dev]