This is it. Mark your calendar guys, as @P0sixninja (Joshua Hill) of the Chronic Dev Team just tweeted the official release date of the most awaited jailbreaking tool, GreenPoison, for iPhone and iPod Touch running iOS 4.1.
GreenPoison will be released at exactly 10:10:10AM on October 10, Sunday.

GreenPoison Jailbreak uses the SHAtter exploit discovered by @pod2g less than a month ago, and the Dev Team still has no words about the tool tethering. The only drawback of the upcoming GreenPoison Jailbreak as of the moment though, is it can’t jailbreak older versions of the iDevices such as iPhone 3GS, iPhone 3G, iPod Touch 3G and previous generation releases. It will only work on those devices powered by Apple’s A4 processor; that actually include the latest devices namely iPhone 4, iPod Touch 4G, and iPad. Apple TV still needs to be confirmed if the tool will work on it.

@P0sixninja added that this coming Sunday would be a fun day after all. I think we have to agree that you’re right, dude!

Update1: Following Geohot’s appearance on the jailbreaking scene the other day, he now released his Limera1n Jailbreak for Windows users. The Dev Team would probably break the scheduled ETA of GreenPois0n and implement Geohot’s exploit. 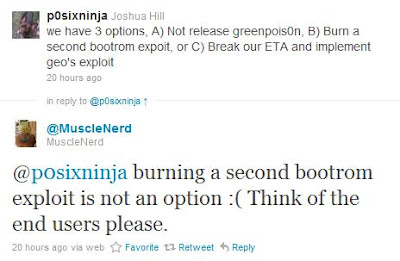 “Here You Have”- Virus on Email?