Share this on social:
After several leaks in the past few weeks, HTC has officially unveiled today the HTC Sensation XL, the Android counterpart of the Windows Phone, HTC Titan. 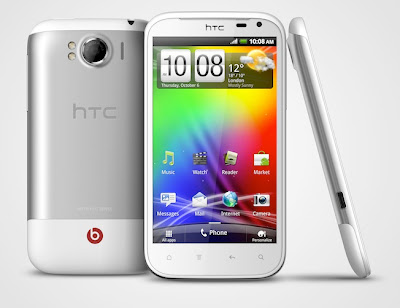 Definitely another product of HTC’s partnership with Beats Electronics, the HTC Sensation XL is the company’s second phone to feature Beats Audio, following HTC Sensation XE; and it comes with a customized and exclusive set of headphones called UrBeats.

With almost similar specs as the HTC Titan like a massive 4.7-inch display, a Qualcomm MSM8255 chipset packing a 1.5 GHz single-core Scorpion processor and Adreno 205 GPU, 8MP camera featuring a 28mm wide-angle and bright F/2.2 lens rated for better performance at low-light conditions, as well as the non-expandable 16GB internal storage — the HTC Sensation XL got a boost in memory now with 768MB of RAM. Like any other high-end devices, it also runs Android Gingerbread; however, it’s already rocking the HTC’s latest costumed UI, the HTC Sense 3.5, before any other handsets get it over-the-air (OTA).

HTC says the HTC Sensation XL will be available across EMEA (Europe, the Middle East and Africa) and Asia Pacific from early November, and of course that includes the Philippines. Suggested retail price is still yet to be known though; but if we have to throw-in a wild guess, it’s somewhere between Php 28-30K. And I’m sure Smart Communications will have it added to its HTC portfolio.

Update: HTC has officially launched the HTC Sensation XL here in the Philippines with a SRP of Php 32,500.