Share this on social:
We are all excited about Sandy Bridge, Intel’s next generation microprocessor architecture officially announced just recently at CES 2011.
We are about to expect 29 new Core i-Series processors under this family to hit stores, but apparently a significant design issue on Intel’s 6 Series chipset has been discovered by the company that could possibly result to chaos.

In a press release, Intel announced that it has discovered a design issue in a recently released chipset – the Intel 6 Series, codenamed Cougar Point – in which in some cases the reliability of the Serial ATA ports within the chipset may degrade over time and could potentially affect performance of devices that utilize such interface, such as the optical and hard-disk drives. 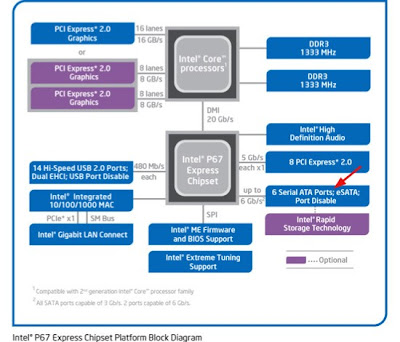 The problem points to the four (4) 3Gbps SATA option of both H67 and P67 Intel 6-Series Chipsets. Technically, Cougar Point comes in two variants – the H67 and P67, in which the main difference is the support for processor graphics as well as memory and graphics over-clocking. By design, both of these variants have four (4) 3Gbps and two (2) 6Gbps SATA ports. And the flaw discovered points to the first one, caused by a single wrong-biased transistor that eventually results to a high leakage current within the affected circuitry. However, using the two (2) 6Gbps SATA slots has no problem and will work smoothly as expected.

Cougar Point is the chipset being utilized in computer systems powered by Intel’s latest Second Generation Core Processors family, codenamed Sandy Bridge – but the failure on the chipset doesn’t implicate defects on the latest processors. Intel says no other products have been affected by the issue, and the company has already corrected the design flaw.

Intel has stopped shipping the affected chipsets and has begun manufacturing a new version chipset that will resolve the issue. It’s expected to be available late February, and the chip maker is expecting full volume recovery by April. This mishap will cost Intel Corporation $300 million revenue reduction for the first quarter of 2011, plus an estimated $700 million cost for repair and replacement of affected chipsets- thus that whopping amount of money explains why there’s no official word for a full-blown recall just yet. [via]

To receive latest technology updates, you can subscribe either by E-mail or by RSS Feeds. Follow me also on Twitter.
Tags: Intel, Micro-Processor, Sandy+Bridge, Tech News