Share this on social:
It has been too long, really, since the very first iPhone 4 user had been stuck on baseband 2.10.04 which is until now still can’t be unlocked using the latest version of Ultrasn0w.

Those who got their iPhone 4 pre-installed with iOS 4.2 or iOS 4.2.1 or those who accidentally upgraded the firmware to the said version without using the TinyUmbrella tool or without upgrading to a custom firmware, are also facing the same problem since iOS 4.2.1 come with baseband 3.10.01 which is also not unlockable just yet.

Given the long wait for the unlock of the said iPhone 4 basebands to be released, some users are desperately claiming the iPhone Dev Team actually has never found any exploit on baseband 3.10.01 or 2.10.04. However, it seems like baseband hacker @sherif_hashim has something good news for you. And believe me, he could be your knight in the shining armor. 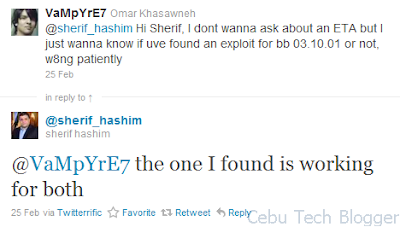 A Twitter follower of @sherif_hashim asked him if he has found an exploit for baseband 3.10.01, but it looks like there’s something more than what had been asked. Sherif responded implicating that he found an exploit that will work both for basebands 3.10.01 and 2.10.04. Though there’s no ETA mentioned, a wilder analysis reveals it would be after a week or two when Apple released iOS 4.3, probably this March. Could it be part of the March 2 event? We don’t know yet. But of course, we won’t let the story pass without bringing it to you. Take a deep breath, and optimistically think the iPhone Dev Team has the new Ultrasn0w unlock already on queue. We’ll let you know for more updates, so just stay tuned!