Share this on social:
Apple is still yet to publish official press release of the upcoming launch of iPhone 4S here in the Philippines and in other countries comes December 16th, but its partner carriers and retailers from these countries have already made the announcement ahead of the official release date. 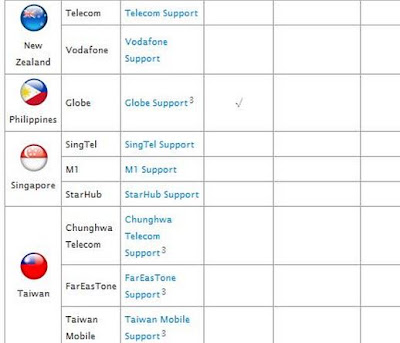 Brazil, Russia, Taiwan, South Africa, Malaysia, Saudi Arabia, United Arab Emirates (UAE), and the Philippines are among those additional countries where Apple is expected to roll out the handset. Interestingly, all of the carriers from these countries — following its announcement on their respective website — have already been listed on Apple’s list of wireless carriers except, well, SMART!

Russia’s Beeline, Brazil’s Claro, Taiwan’s FarEasTone, South Africa’s MTN, Malaysia’s DiGi and Maxis, Saudi Arabia’s Mobily, and the Philippines’ Globe Telecom — are all listed already on Apple website. SMART whose iPhone 4S offering was first hinted back in November and finally announced the availability just last week seems to have been missed. It should be noted though that the list of iPhone wireless carriers was last modified 2 days ago to include Apple recent partners to roll the handset. But why SMART still haven’t included in the list? Did Apple intentionally exclude SMART? Well, I exactly not sure about that. Could it be Apple and SMART actually haven’t inked the final deal yet? Sounds too risky, isn’t it? Anyway, we’ll try to uncover that.