There’s an ongoing early access offer for the action-adventure game Lara Croft and the Guardian of Light, in which free Beta keys are being given away for Gamespot members, exclusively. 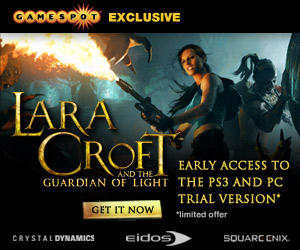 Lara Croft and the Guardian of Light is the first ever co-op multiplayer action adventure game featuring Lara Croft. This brand new downloadable adventure combines the hallmarks of the Tomb Raider franchise, including exploration and discovery, platforming, and puzzle solving combined with character progression, fun fast-paced combat, and elements of human cooperation and competition.

The PC and PS3 version of this game is scheduled to be released on September 28th. If you’re interested of getting one, go check out this page for an early access to the trial mode versions.