Share this on social:
The LG Optimus Pad is inarguably the first 3D tablet in the world yet it’s also the most expensive Android slate out there on its category.


Donning what could be the standard specs built to most tablets these days (like 2-core CPUs with minimum 1 GHz processing power, bigger touchscreen display and over-all form-factor, rear and front cameras, Android Honeycomb OS, sensors, wireless connectivity options, and among others), you can expect the LG Optimus Pad to retail just between Php 30K to 35K. But no, you’ll be surprised to know that the South Korean’s 3-D tablet will have a suggested retail price of Php 50K once it made a landfall in the Philippine soil. Too expensive, huh? 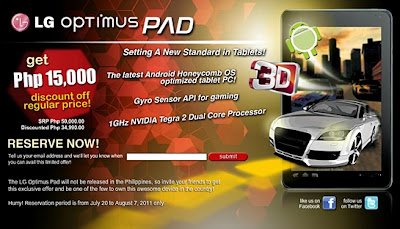 Honestly speaking, I’m not seeing something special on LG Optimus Pad except of its capability to create stereoscopic photos and videos or 3-D imaging effects. Other components inside the slate are pretty much standard to competing products running a different platform like iPad 2 and HP TouchPad, or even to the same Honeycomb devices like Samsung Galaxy Tab 10.1, Motorola XOOM, and etc. – which nothing even break the Php 40K mark for the 32GB variant.

Though not yet officially available in the Philippines, LG has already setup a pre-order page just in case you’re interested of getting one. And oh, those who pre-order starting today until August 7th will have a chance to grab Php 15K discount off regular price, leaving you a discounted price of Php 34,990. If that sounds a good deal for you, go hit this link.

To receive latest technology updates, you can subscribe either by E-mail or by RSS Feeds. Follow me also on Twitter.
Tags: Honeycomb, LG Philippines, LG+Optimus+Pad, Tablet+Honeycomb

Windows 8 is Microsoft Next Operating System?