This has been rumored even before the final release of Windows 7, but it looks like details of Windows 8 have already been leaked on the internet.
Windows 8 is said to be the next Microsoft computer operating system to be released by 2012.

Below are screenshots of Windows 8 product cycle and other confidential slides stamped “Microsoft Confidential” and “Under NDA”. The slides also contain a footnote “Windows 8 Discussion, This is NOT a Plan of Record”. 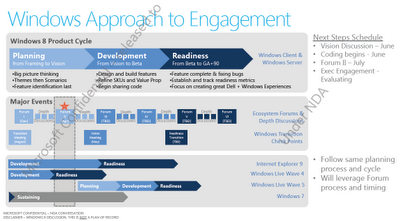 Among the believed early Windows 8 features will include startup performance boost, visual login, and improved graphics. There might also some improvements on the next generation high-speed connectivity solutions such as USB 3.0 and Bluetooth 3.0 within Windows 8.

Microsoft has not confirmed yet the authenticity of the slides though, so stay tuned for more updates on Windows 8. What can you say about this?

iOS 5 Jailbreak Works in no time!