An application called My3G will allow iPhone Wi-Fi only apps to run on a 3G network.

My3G simply makes iPhone applications believe that they are running on WiFi instead of 3G. This means that you iPhone users can already watch YouTube videos or call friends on Skype over 3G network.

Published on iClarified, the following are the features of My3G: 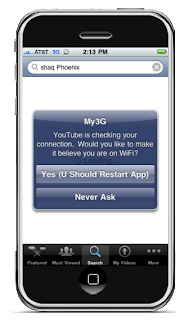 1. In-App popup request to enable/never ask for My3G to be enabled for that app.
2. In-App indicator when My3G changes the network from 3G to WiFi.
3. Ability to select which apps are My3G enabled and not.
4. Default Apps – no configuration for the most popular apps!
5. SBSettings Toggle! You can temporarily enable My3G for all apps or toggle back using your defined Apps list.
6. Dynamic enablement – Higher successs rate (near 100%) then 3G Unrestrictor (which does one off solutions for apps). My3G enables 3G indicators more dynamically.

By the way, if you have the 3G Unrestrictor installed- My 3G will replace it. In addition to this, this app uses RockApp which will also be installed during installation. My3G costs $2.79, but a free trial is offered alongside the RockApp install.