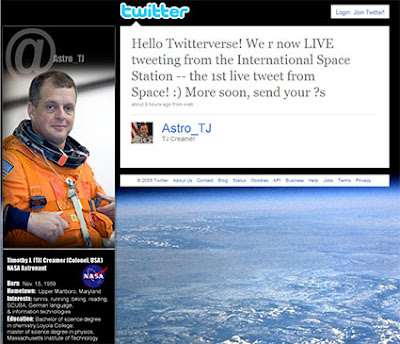 According to NASA, “Previous tweets from space had to be e-mailed to the ground where support personnel posted them to the astronaut’s Twitter account.”

This personal Web access, called the Crew Support LAN, takes advantage of existing communication links to and from the station and gives astronauts the ability to browse and use the Web. The system will provide astronauts with direct private communications to enhance their quality of life during long-duration missions by helping to ease the isolation associated with life in a closed environment.

Astronauts are said to still be subjected to the same computer use guidelines as government employees on Earth and the crew will continue to have official e-mail, Internet Protocol telephone and limited videoconferencing capabilities.

If you are a Twitter user, you can receive updates from T.J. Creamer and two of his crewmates, ISS Commander Jeff Williams and Soichi Noguchi- by following http://twitter.com/NASA_Astronauts.

If you are new here, you can subscribe either by E-mail or by RSS Feeds.