Share this on social:
I was expecting Nokia will introduce a new Symbian Anna device in the future that is better than Nokia E6 and Nokia X7 to compete with higher end smartphones, but surprisingly – the Finnish firm just announced a new Nokia 500 smart phone that definitely will contend in the entry-level category. 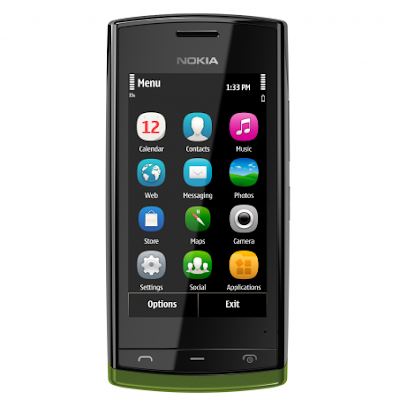 The Nokia 500 is a slate phone boasting a much higher 1GHz processor compared to E6 and X7 (though no GPU here folks) and running Nokia’s latest Symbian Anna operating system. Measuring 111.3 x 53.8 x 14.1mm and weighing just 93g, this phone is certainly lighter than Symbian^3 devices out in the market today. It flaunts a 3.2-inch capacitive touch screen display with nHD resolution, which is technically around 640 x 360 pixels, or the same resolution we got from Nokia N8.

Also under its hood is a 2GB internal storage expandable up to 32GB, 5MP camera (full focus), standard 1110 mAh Li-Ion battery, and support for the standard wireless technologies like 3G, GPS (with A-GPS), and WLAN, as well as connectivity like Bluetooth 2.1, USB 2.0, and a 3.5mm connector for audio and video.

The Nokia 500 will start shipping before this quarter ends with a price of 150 Euros or around Php 9K excluding local taxes or operator subsidies. It would be available in black and white, with additional three different-colored back covers in the package.

More of Nokia 500 once it lands here in the Philippines, but for the meantime – check out specs and pair of videos after the break.

To receive latest technology updates, you can subscribe either by E-mail or by RSS Feeds. Follow me also on Twitter.
Tags: Nokia Philippines, Nokia+500, Symbian, Symbian+Anna

Good News! Windows 8 Will Run on Windows 7 and Vista Systems!