Share this on social:
Alongside Nokia’s announcement of Symbian Belle, the Finnish phone maker also unveiled three new phones to carry the newest version of its OS. 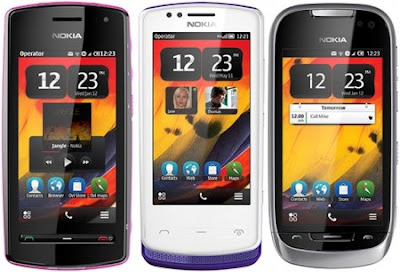 First up is the Nokia 700 which is claimed as the smallest smartphone in the world. Well, just measuring at 110 x 50.7 x 9.7mm and only weighs around 96g, this tiny device is undeniably small. But it got decent specs like 3.2-inch ClearBlack AMOLED display with gorilla glass, 1GHz processor, 5 megapixel camera with LED flash, NFC support, 2GB storage expandable up to 32GB via microSD, Bluetooth, Wi-Fi, HSUPA 3G support, FM radio, and 1080mAh standard battery. The Nokia 700 is coming in cool grey, silver/white, coral red, peacock blue and purple varieties. It’s expected to be available in Q3 with a Euro price at EUR 270 without local taxes and operator subsidies.

Next up is the Nokia 701 which is according to Nokia, is the smartphone in the world with the brightest screen. Uhmm… Really? Well, with its 3.5-inch IPS LCD display with ClearBlack technology, the phone is said to create a combination of excellent brightness and contrast which determines the phone’s luminance. And like the Nokia 700, it’s also wrapped with Corning’s Gorilla Glass technology to prevent scratches from brawny pressures in any surface. The phone got an 8MP full-focus shooter with dual-LED Flash, plus a front-facing camera for video calling. Also under its hood are 1GHz processor, 8GB storage expandable up to 32GB via microSD, HSUPA 3G, WiFi, NFC, Bluetooth, GPS, FM radio, and 1080mAh standard battery. It measures 11 x 56.8 x 117.3mm and weighs 131g. The Nokia 701 will be available in steel dark, silver light, amethyst violet, and white variations and is expected to come to market in the third quarter of 2011. Euro price before local taxes or operator subsidies is at EUR 290.

And last but not the least, the Nokia 600 – the Finnish loudest phone. Loudest, huh? I think it got the same phon rating with Nokia X1-01, the music-centric dual-SIM phone which can also deliver the same loudness level of 106 phons. In any case, the Nokia 600 features a 1GHz processor, 3.2-inch nHD display, 5MP camera with LED Flash, NFC support, 2GB storage expandable up to 32GB via microSD, Bluetooth, Wi-Fi, HSUPA 3G support, FM radio, and 1080mAh standard battery. Basically this phone only differs from Nokia 700 because of type of its display (not AMOLED). It measures 111 x 53 x 13mm and weighs 100g. It will be available in black, white, pink and lime from Q3 of 2011 and will cost around EUR 180 before local taxes and subsidies.

We’ll be eyeing on this new Symbian Belle phones and will just keep you posted once it lands in the Philippine soil.

To receive latest technology updates, you can subscribe either by E-mail or by RSS Feeds. Follow me also on Twitter.
Tags: Nokia Philippines, Nokia+600, Nokia+700, Nokia+701, Symbian, Symbian+Belle