Share this on social:
Norton by Symantec has already released the public beta version of its All-In-One Security suite, Norton 360. 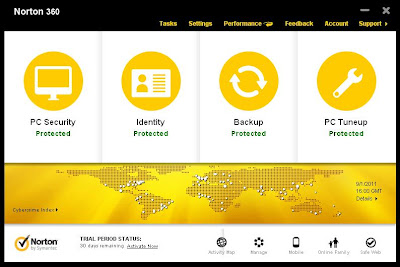 Norton 360 V6.0 Beta is said to offer powerful core security technology found in Norton Internet Security 2012, in addition to the enhanced PC tuneup and backup capabilities of the software. It also comes with new protection and usability improvements which includes:

I’ve been using Norton 360 V5.0 for months now and I must say it’s undeniably among the best security software for PCs. It’s light, clever, comes with great UI, and doesn’t eat much of your computer’s memory; so I’m quite excited to see how the new version performs on the same system. You may be interested of reading my review of Norton 360 Version 5.0 here.

The Norton 360 version 6.0 Beta is available for free public download now via this link.

Nokia comes out with the X family, 3 Windows themed Android smartphones for less