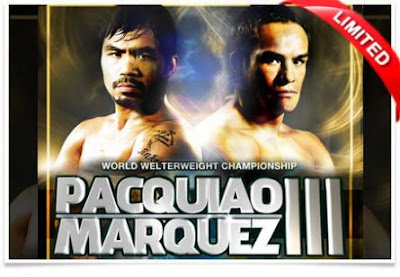 But it was just a matter of few minutes since the final decision was announced, and now the replay video of the entire fight has been leaked into a popular torrent site.

Manny Pacquiao secured a 12-round majority decision against Marquez to retain his WBO Welterweight title before thousands of boxing fans at the MGM Grand in Las Vegas, Nevada. As it turns out, the final decision majority for Pacquiao (114-114; 115-113; 116-112) seems to be controversial. I won’t give any further commentary about the gameplay, instead, I’ll just let you watch it in any case you haven’t seen it yet.

The entire video is now available for download via Torrent. Titled Pacquiao vs Marquez LIVE[HDTV].XviD-KYR, the file size of the video is around 406.86 MiB.

Disclaimer: CTB don’t promote piracy in any way. Download the video at your own risk. I’m not allowed to post the link, hence, I won’t be posting it here. But if you badly need it, it was first spotted at The Pirate Bay.

Update 1: The torrent has already been removed. You may watch the full fight through the embedded videos after the break.

Update 2: The embedded videos have been removed; All were taken down from the source.

If you like this post, please consider this sharing to your friends by clicking the buttons on the left.