Share this on social:
Wait no more! If you’ve been waiting for Nokia’s latest smartphone in the E-Series lineup to officially land here in the Philippines, here’s good news for you. 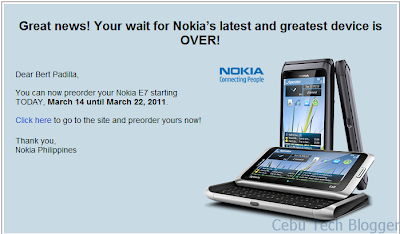 First announced on September last year, Nokia Philippines is now accepting pre-orders of Nokia E7 starting today, March 14th, until March 22nd. Pre-ordered units are ready for pick up at your preferred Nokia Store anywhere in the country on March 26-28th. Nokia will also include a DC-11K Power Charger as a free gift for the first 500 customers to reserve a unit, just similar marketing strategy they did by giving away free 16GB of flash drive for every N8 pre-order. If interested, just hit this link. 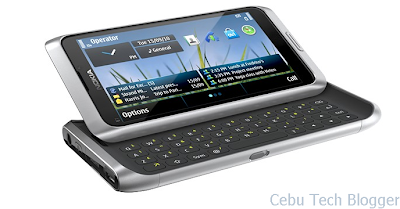 The Nokia E7, which is touted as the ultimate business smartphone flaunting a 4-inch AMOLED capacitive touch-screen display for better viewing experience, is actually similar to the Nokia N8 in outer build; except that it’s packed with a “real” QWERTY keyboard, accessible by flipping the screen sideways. It’s powered by 680 MHz ARM 11 CPU and Broadcom BCM2727 GPU on Symbian^3 OS. It also features a 16GB internal storage, 256MB RAM, and 1GB ROM.

Check out notable specs and features of Nokia E7 below:

Price here in the Philippines is said to be around Php 32,000 – and I guess that would be fair enough, though I haven’t really tried using the handset just yet. Just by checking the specs compared to other high-end smartphone from other brands. So, anyone here buying?