Share this on social:
His Holiness is now in the cloud.
The Pope just launched the Vatican news portal, The Vatican Today. And guess what? He did it on Twitter using his magical tablet device, the iPad!

Dear Friends, I just launched news.va Praised be our Lord Jesus Christ! With my prayers and blessings, Benedictus XVI

It’s the Pope’s first tweet ever and now I’m thinking – could it be a Holy tweet? And the tablet is a Holy iPad? That sounds crazy, but yes – it might be. 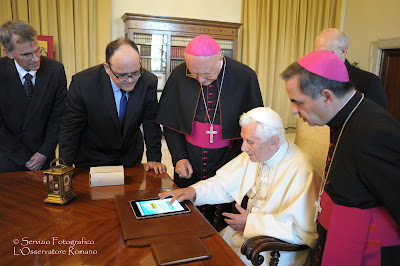 It’s not a big deal though if the Pope really owns that iPad, but at least we saw him using it. And it feels different watching him sending the message to world, really. Watch this video courtesy of Rome Reports.

There’s one thing I’m sure about this though, Steve Jobs will certainly keep on smiling for such great honor his craft was once held by the Bishop of Rome. Seriously, it could be a huge advertisement for the iPad.J

Angry Birds Rio is Coming… and They Need Your Help!