Share this on social:
I believe many companies in the consumer electronics industry are doing similar efforts to help the victims of the devastating Typhoon Sendong, but it’s great to note one of these companies is Research In Motion (RIM) – the company behind the popular BlackBerry mobile handsets and other services. 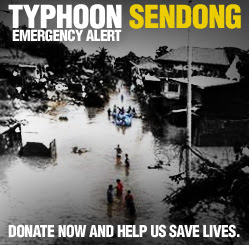 RIM announced on Monday that it is donating 1-million pesos and 30 BlackBerry smartphones to the Philippine Red Cross, following the onslaught of Typhoon Sendong.

Research In Motion (RIM) Philippines is deeply grieved by the onslaught of Typhoon Sendong. As a response to the calamity, RIM is donating PhP1,000,000 and 30 BlackBerry smartphones to the Philippine Red Cross and calls on the BlackBerry Pilipinas community to give and donate as well.

The most recent fatalities reported as of this writing from storm Sendong is nearly 1000, according to the National Disaster Risk Reduction and Management Council. The Philippine National Red Cross however said they have recorded a total 713 deaths in both Cagayan de Oro and Iligan cities alone.

On behalf of the Filipino community, CTB salutes this relief effort of RIM and we wish other companies in the industry will do the same. For CTB readers who are interested of sending donations, you can do so by visiting this link.

Win a BlackBerry Curve 8520, HP 210 Mini Netbook, and The New iPad from CebuTechJobs.com