Share this on social:
So you think Samsung will just keep on releasing new phones and tablets in the future? Obviously, no! 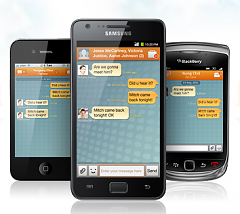 In fact, the Korean phone maker has been very busy prepping up its new messaging service called ChatOn, set to debut next month at the IFA consumer electronics trade show in Berlin, Germany.

At first, you would think Samsung’s ChatOn as yet just another BBM-like chat service, but it’s probably not as far as the demo video below is concerned. ChatOn brings something new in group chat services available today such as multimedia sharing through its “Trunk” feature, sending animated messages, and there’s also what it calls “Interaction Rank” which shows contacts you send messages the most. Though quite impressive, it’s still unclear if this chat service will ever take off the likes of Facebook Messenger, the Huddle in Google+, WhatsApp, GroupMe, or even Apple’s upcoming iMessage service in iOS 5.

Samsung says ChatOn will be available in 120 countries and 62 languages; and will not only work on its proprietary Bada OS, but also in Android, BlackBerry OS, and iOS.

Take a look the intro video below and let’s see if you like it.

Samsung Galaxy S2 Released in South Korea, Available in 120 Countries from Early May