Share this on social:
Speculations are rife among smartphone users in the Philippines about the rumored upcoming release of Samsung’s new stellar product, the Samsung GALAXY Note. 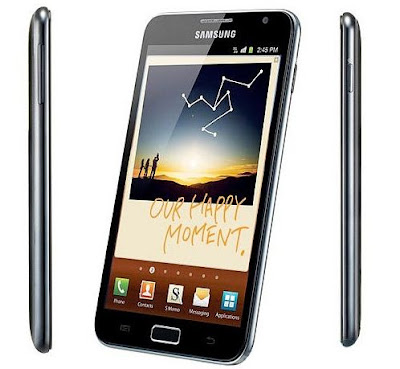 Just in case you missed the announcement two months ago, the Samsung GALAXY Note is a new category of product which combines the benefits of various mobile devices while maintaining smartphone portability that is aimed to create a whole new level of user experience. Developed with Samsung’s deep consumer understanding and insight, this yet another super-phone may outsmart other smartphones in the market today with incredibly enhanced features including the gorgeous 5.3-inch HD Super AMOLED display, claimed as the world’s first and the largest high quality display available in any phone; a touch screen with a unique S Pen, an advance pen-input technology that will produce a uniquely accurate level of control and finesse to capture and create ideas while on the go; a 1.4Ghz Dual-Core Processor that will ensure an incredibly fast and smooth user interface and seamless usability; 1GB RAM; 8MP rear-facing camera and 2 MP front facing camera; and a massive 2,500mAh battery that will surely not hinder your mobile lifestyle. Read more for updates below…

And now the question is, when it will land in the Philippines and how much? Well, Samsung Philippines is still yet to release an official announcement regarding the matter; but as early as today, we learned the Samsung GALAXY Note has already made its way to the shelves of Widget City. They ran out of stocks though, but for those who can shell out as much as Php 36,400 (Yes, that’s the unofficial price, mind you.) – you may want to head on this page to book your order with the device’s availability come November 10th.

Samsung’s best selling smartphone to date, the Samsung GALAXY S II retails for Php 29,990 at official launch here in the Philippines; so it’s pretty obvious the GALAXY Note carrying a much higher-end specs will have a price tag above the Php 30K mark, perhaps around Php 33-35K at official launch. Of course we’ll also see this on local carriers Samsung lineup particularly Globe Telecom.

Announced back in September 1st, the Samsung GALAXY Note started to roll-out in Germany late October, followed by Netherlands, Belgium, UK, and France in the next few days. It’s expected to be available in most of Europe this month, so hopefully Asia including the Philippines will have it on late November. Now that makes me think the much anticipated iPhone 4S which is expected to hit Globe Telecom stores on the same time frame really got a huge contender.

Anyway, we’ll just keep you posted once we received official announcement of GALAXY Note here in the Philippines. Stay tuned!

CTB learned that Samsung GALAXY Note will launch on November 15th here in the Philippines. Official price is still yet to be known.