Share this on social:
It’s almost three months already since we got the official price of Samsung GALAXY S II here in the Philippines, and I thought it would make sense to revisit for the first time, our favorite local gadget stores how much they are offering the dual-core Android phone today. 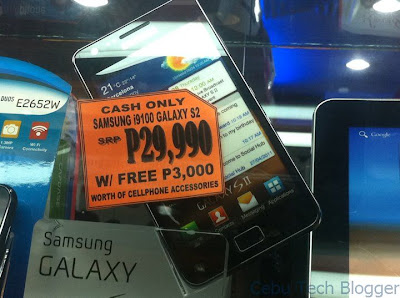 Undoubtedly, the Samsung Galaxy S2 is still selling at the same SRP of Php 29,990 in most of the stores I personally visited here in Cebu, only that they are competing with additional freebies they bundled with the handset. The Samsung GALAXY S2 is one of the best dual-core smartphones today, recognized with great overall performance and has received positive reviews in the tech world; thus resulting to a strong demand for the handset. In fact, when the phone hit stores in South Korea, it became the fastest selling smartphone ever after Samsung sold over 1 million units in just a month. The feat was even more impressive when Samsung tripled the number in global shipments (excluding US) in less than 2 months since the official launch.

The strong demand could be the reason why you won’t see price drop just yet, even here in the Philippines. And it’s still unclear how exactly the newly-announced LTE version would affect the price of the first GALAXY S2.

So anyone here rocking this super phone? How much did you get it?