I was able to have a quick hands-on of the Samsung Galaxy Tab at the Globe Telecom Concept Store yesterday. It’s actually a single unit displayed for prospective subscribers of the telco’s unlimited internet plan for the tablet.

I’ve seen this device here in Cebu, more than a month after the official release in Germany back in September – but it was just yesterday that I was able to hold and had a quick preview of this Froyo tablet from Samsung.

The Galaxy Tab is basically smaller than Apple’s iPad or just as big as the BlackBerry PlayBook. You can actually put it on your pants back pockets, just don’t forget to pull it off before you sit J. 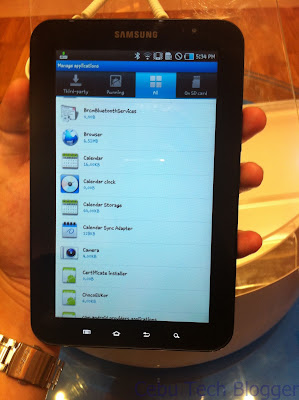 At the front side of the device is the 7-inch WSVGA screen with the touch panel at the opposite edge of the company logo. There’s a front-facing camera located on the upper-right portion of the tablet. 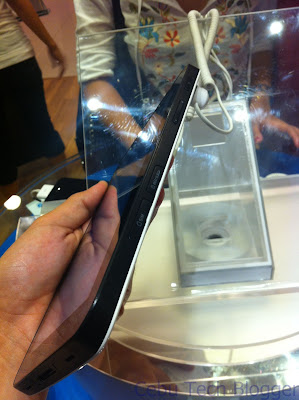 The sides of this tablet are black matte in which you will see the 3.5mm headphone jack at the top; the power button, microSD card slot, SIM card slot, and volume controls on the right; the small microphone on the left; and the 30-pin connector port and the built-in speaker at the bottom. 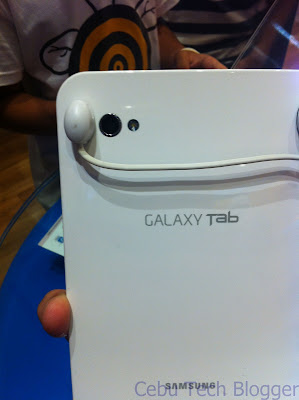 The back panel is all-white, designed with a glossy plastic, with the 3MP rear camera and LED flash on the upper-left. The Galaxy Tab feels lighter than the Cherry Mobile Superion I previewed recently, that’s probably because of the non-metallic build.

With the Android 2.2 OS, running TouchWiz 3.0, the overall performance of the Galaxy Tab is impressive as it’s still donning the 1 GHz A8 Hummingbird processor and the PowerVR SGX540 GPU – as also seen from the Galaxy S specs. Just wondering how it will perform on Gingerbread or Honeycomb when it officially comes out.

You may want to check the quick hands-on video after the break.

Google Instant Available on iOS and Android Devices in the US

Samsung Galaxy S2 Released in South Korea, Available in 120 Countries from Early May