So everyone has been waiting for this. Good news for Verizon Wireless customers in the US as Samsung’s tablet PC, the Galaxy Tab, has already been priced. 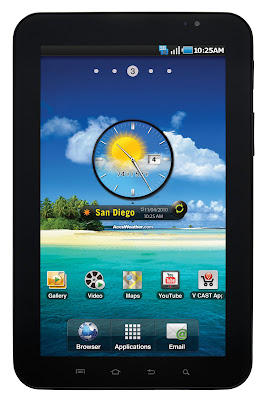 Available on November 11th, Samsung Galaxy Tab can be purchased for $599.99 on top of the $20 monthly access plan with 1GB of data.

“This is an incredible time in mobile technology, and as a company we’re excited to add the Samsung Galaxy Tab to our portfolio,” said Marni Walden, vice president and chief marketing officer for Verizon Wireless. “The Samsung Galaxy Tab brings together the reliability of Verizon Wireless’ 3G network and the power of Android 2.2 to deliver on our promise of providing consumers and business customers with a host of options to help manage their lives.”

Verizon Wireless is the first network to announce the availability and pricing of this device, though it would also be available to AT&T, Sprint, and T-Mobile subscribers in the US. Though Apple’s iPad will be coming to Verizon 2 weeks ahead as it was scheduled for October 28th release, it appears that the Galaxy Tab is cheaper as compared to the starting price of $630 for the iPad – also for 1GB data plan at $20 a month.

Here in the Philippines, Samsung Galaxy Tab will also come next month; however there’s no official pricing released yet. But what is known so far is it would be available for all networks. So just stay tuned for more updates! [via PR]

And the Nokia E6 Winner Is…