Share this on social:
It’s very obvious. Sammy won’t be competitive enough in the tablet warfare if the company won’t cut the current price point of its first tablet – the Samsung Galaxy Tab.

We expect this year to see more tablet devices from other brands coming into the competition, mostly are built with decent specs trying to outperform the likes of Apple iPad and Samsung Galaxy Tab. HTC Flyer, Motorola XOOM, BlackBerry PlayBook, ASUS Eee Pad Tablets – just to name few are all first iteration of the big players in the tablet arena. And yes, those low-cost models from the French company Archos and our homegrown Cherry Mobile still count and they do have a share of the pie.

But for the pioneers, it’s just the beginning. In fact, Apple just released its iPad 2 more than a week ago; while Samsung is still prepping the official launch of its 10.1-inch Galaxy Tab. The tight competition dictates the price direction and for companies to stay competitive (and perhaps dominative?), they have to look back at the original price points of its devices. There should be a markdown. Apple already did that. Here in the Philippines, the first-gen iPad is already priced Php 4K less than the original price. And for Samsung to implement the same marketing strategy, the Korean company is also slashing the original price of the 7-inch Galaxy Tab. Interesting! 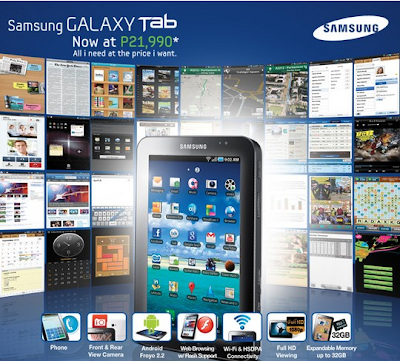 Just got a word that Samsung Philippines already have a new suggested retail price for the Galaxy Tab, model GT-P1000. How much? Well, expect to have it for Php 21,990. That’s Php 13K less than the official price when it first sells here in the country. If you are thinking of buying one, go check out my first impression before you visit your favorite Samsung reseller. But make sure the tablet already have the reduced price tag, because the final word from the person I talked with was- the company is still ironing everything to see every store in the country is selling the tablet with the same markdown price. Not bad, eh?