Share this on social:
1Mbps somehow could be the plan-of-choice by most broadband internet subscribers in the Philippines.

For just Php 999 a month, one can get an unlimited internet connection quite enough for web surfing, video streaming, VoIP services, among others. If you’re a heavy user, you probably have noticed that sometimes your connection feel creepy, perhaps because your ISP is employing bandwidth throttling to minimize congestion of the network. But how about a 5Mbps data transfer speed just for the same price? Well, I think that’s something to consider whether it’s what you really want to suffice your internet needs. 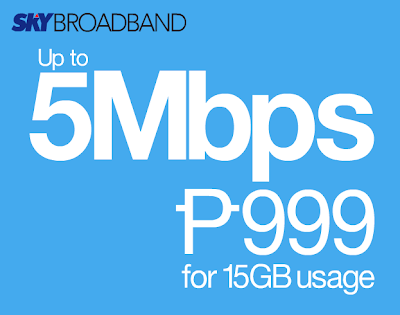 Sky Broadband, SKYCable’s internet service, is now offering a new consumable plan with data speed of 5 Mbps just for Php 999. Basically, that’s five times faster than the usual 1 Mbps Plan from other ISP’s, yet stays just of the same price. The only catch here though, is the data cap of 15GB in a month. Broadband data capping here in the country remains a debatable issue that even our very own NTC dropped its proposal to include it on the memorandum order announced last year. But for Sky Broadband, it’s yet another choice of a faster, unlimited internet access.

If you think your average monthly data consumption is less than 15GB, then this plan would better suffice, as far as speed is concerned. Need more than 15GB of bandwidth cap? Well, just add Php 100 more on top of the initial Php 999 and you get an additional 1GB of data for the month.

The new 5 Mbps plan also comes with a monthly data cap of 35GB, but this time the price is doubled, that is Php 1,999. Ain’t that bad, huh? Go check it out, and do let us know what you think about it.

Osmeña: Cebu will get cashless payment system for BRT