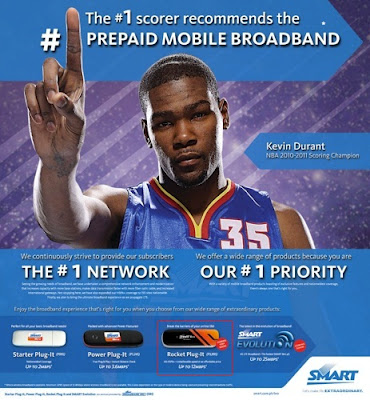 It’s interesting to note that SMART is also pushing LTE with its SMART Evolution, but I understand it’s not widely available in the country just yet. The Smart Bro Rocket Plug-It, however, could reach to key cities like here in Cebu so I guess we’ll see dongles being sold in wireless centers locally. And if that happens, I think SMART will have a head start over Globe on the HSPA+ category since the latter’s Lamborghini stick is not yet available here. Let’s just wait anyway until SMART make the Rocket Plug-It official.

And oh, by the way, SMART’s new endorser for its mobile broadband products including the Smart Bro Rocket Plug-It is none other than the NBA 2010-2011 scoring champion, Kevin Durant. That’s a huge investment you put in there, SMART! J