Share this on social:
It’s official! Smart Communications will also offer the much anticipated iPhone 4S here in the Philippines! 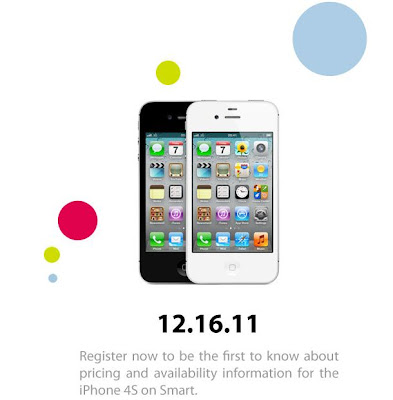 In fact, the MVP-led telco in the country is now accepting registration of interest for the iPhone 4S. Oh yes, Smart unveiled it today as well; right after Globe Telecom pulled the trigger of its offering. But unlike Globe’s announcement, Smart has confirmed when exactly the handset would be available. And that would be on December 16, 2011, Friday.

No pricing details have been revealed; however, we know for sure the handset would also be available both in black or white colors and all models (16GB, 32GB, 64GB) are on Smart’s inventory as well.

To register your interest for the iPhone 4S from SMART — just head over to the telco’s website via this link.

Windows Phone 7 Ad “The Revolution is Coming”, hit the Web