So which smartphone OS are you- iOS, Android, Windows Phone 7, BlackBerry OS, or Palm OS?
If you live in the US, perhaps you are one among those who are currently using Apple iDevices or BlackBerry devices, which are currently on the statistical dead heat. 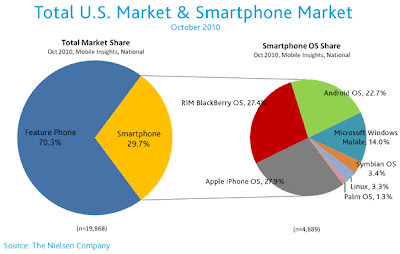 Nielsen reports that in the US, 29.7% of the total mobile phone subscribers own smartphones that run in full operating systems. And with that smartphone OS share, RIM BlackBerry OS and Apple iOS are caught in a close competition. According to October 2010 data from The Nielsen Company, Apple iPhone OS or iOS has 27.9% of the total Smartphone OS Share while RIM BlackBerry OS has 27.4%. That’s 0.5% close difference in favor of the iOS. 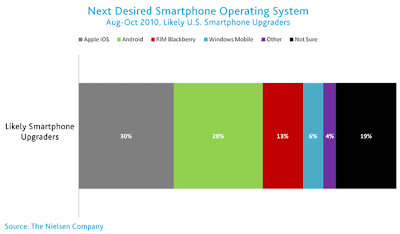 Nielsen also added that if mobile phone users who planned to upgrade to a smartphone device in the next year were asked about their next phone, the iOS and Android were tied for “most desired” operating system.

Interesting… That basically implicates a battle between iOS and Android in 2011 until 2014. These two smartphone OS’s will gear as the 2nd most widely used mobile OS worldwide, next to Symbian which still remains dominant. [via]